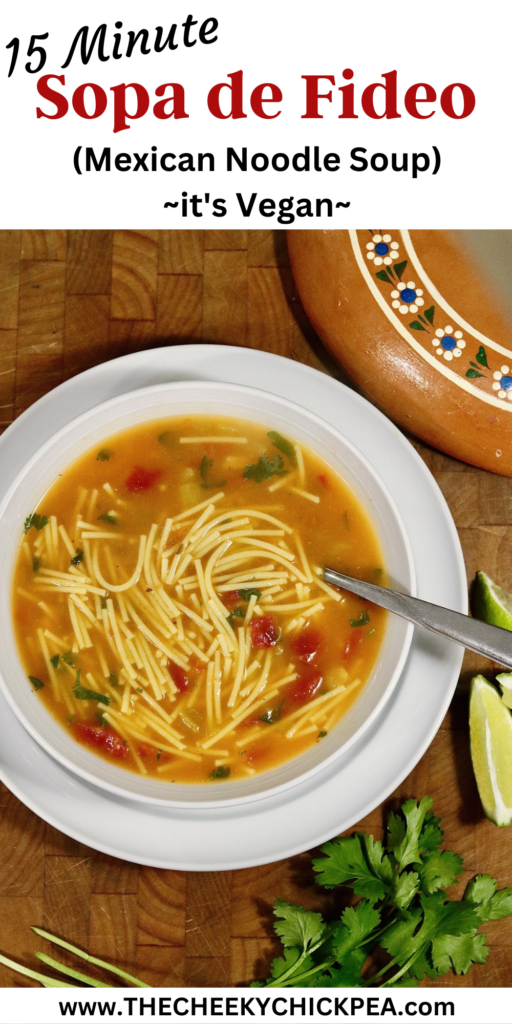 Sopa de Fideo is an incredibly quick, simple, and flavorful Mexican noodle soup. This vegan version features fideo noodles simmered in a perfectly spiced tomato-based vegetable broth. It’s a 15-minute recipe you can make on the stove or in the Instant Pot!

A comforting bowl of Sopa de Fideo is all you or the kids need to feel comforted and warmed from head to toe. It’s a flavor-packed, yet incredibly simple vegan Mexican noodle soup made with ingredients you likely already have at home. Just like my Classic Vegan Chicken Noodle Soup, this recipe is easily loved by all!

What is Mexican fideo soup?

Sopa de fideo (“noodle soup”) is made with a warm and comforting tomato and broth base and golden toasted noodles. It’s a classic dish in many Spanish households because it’s easy to make and budget-friendly. More authentic versions use a tomato and chicken broth base, but my vegan version uses simple substitutions that are just as tasty and warming.

Vegan fideo soup and vegan chicken noodle soup have a few things in common: they’re both made with plant-based chicken broth and noodles, and every slurp is incredibly comforting. However, sopa de fideo skips the sauteed vegan chicken, poultry seasonings, and vegetables found in traditional chicken noodle.

Instead, it has a smooth texture (besides the noodles) and a spiced, subtly tangy broth. It’s extra easy to make, too. There’s no sauteing or much prep involved; just blend the broth ingredients, simmer it in a pot with the noodles, and enjoy.

How to make sopa de fideo

This might be one of the easiest, low-maintenance soups you’ll ever try:

Step 1: Prepare the broth. Add the onion, garlic, half of the tomatoes and chilies, and some broth to a blender. Blend until smooth.

Step 2: Add it to a pot. Pour the broth into a large soup pot. Add the fideo noodles and the rest of the ingredients (except the cilantro and lime).

Step 3. Heat the soup. Bring the soup up to a boil, then immediately reduce the heat to a simmer. Cover with a lid and cook until the noodles are tender.

Step 4: Season and serve. Take the soup off of the heat and stir in the cilantro. Taste and add more seasonings as needed. Ladle into bowls, serve with a lime wedge, and enjoy! For full ingredients and instructions see printable recipe card below.

Add the pureed broth and the rest of the ingredients (except the cilantro and lime) to the Instant Pot. Cook on High Pressure for 4 minutes, then quick release the pressure. Stir in the cilantro, then serve!

Make ahead and storing

Make ahead: The soup is best eaten the day it’s made because the noodles will become soggy as they sit. The best way to save time with this recipe is to blend the broth mixture 2 to 3 days in advance. Keep it in a container in the refrigerator until it’s time to heat it up with the noodles.

Store: If you do end up with some leftovers, keep them in an airtight container in the fridge. Enjoy within 1 or 2 days.

Reheat: Quickly zap the leftovers in the microwave or reheat them in a saucepan on the stove.

Enjoy everyone! Happy Day! Please feel free to comment below and give this recipe a rating. Your feedback is greatly appreciated!

Subscribe here for free weekly recipes delivered right to your inbox! No need to scour the internet. Your one stop shop for recipes is here😊 No spam I promise!

Sopa de Fideo is an incredibly quick, simple, and flavorful Mexican noodle soup. This vegan version features fideo noodles simmered in a perfectly spiced tomato-based vegetable broth. It’s a 15-minute recipe you can make on the stove or in the Instant Pot!

This was originally posted Winter of 2018 it has been updated with new photos and more. Recipe itself is unchanged.

Hi, I’m Verna! Major foodie of all things vegan! Welcome to The Cheeky Chickpea; here, you’ll find hundreds of restaurant-worthy easy vegan recipes. Some oil-free and gluten-free, from veggie-powered plant-based comfort foods to decadent desserts. Lots of tricks and tips up my chef sleeve…Grab your apron let’s get cooking!