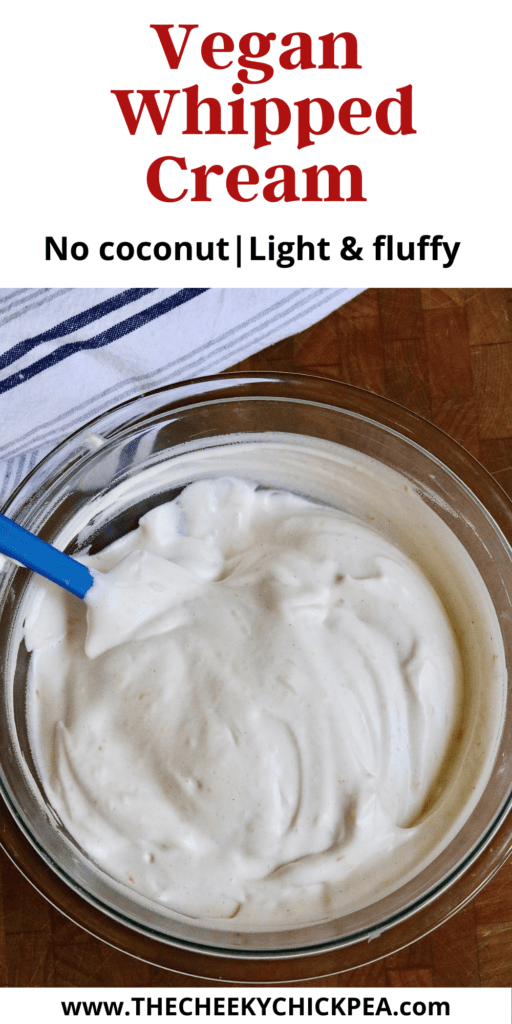 This Vegan Whipped Cream recipe is ultra-fluffy, light, and coconut free! It’s easy to make using aquafaba and whips up in about 10 minutes. Perfect for holidays, special events, or whenever you want to turn vegan desserts into irresistible treats!

Making vegan whipped cream with aquafaba is so much easier than with coconut milk. Simply pour the aquafaba into the bowl and whip! There’s almost no prep or wait time.

A standing mixer or handheld mixer will give your elbow a break when making this recipe. Just like meringue, aquafaba can take up to 10 minutes to whip into stiff and sturdy peaks. Save yourself the trouble and invest in an electric mixer!

Be the first to receive mouth watering FREE new vegan recipes and more… straight to your inbox!!

This sweetened, fluffy whipped cream is a must-have in any vegan home baker's repertoire. The well-balanced and creamy flavors. Use it during the holidays, on all kinds of vegan desserts, or as a topping on smoothies and coffee drinks year-round!

Aquafaba is another name for the liquid or brine in a can of chickpeas. This “bean juice”, when whipped, becomes an airy mixture that’s almost the same as real meringue. The flavor isn’t very appetizing on its own but when it’s whipped with sugar and vanilla, the aquafaba whip is just as delicious as traditional whipped cream.

What is aquafaba whipped cream made of?

Pro tip: I like to add a pinch or two of cinnamon and orange zest for extra flavor. Feel free to do the same!

How to make vegan whipped cream

This aquafaba whipped cream recipe makes about 4 cups of whipped cream. Turn to it during the holidays or whenever your vegan desserts could use a little extra sweetness. Here’s how you make it:

Use your vegan whipped cream on all kinds of delicious treats! These are just a few ways to use it:

And so much more!

This “bean water” tastes pretty much how you would expect… like beans. That flavor, however, is well hidden when it’s whipped with sugar and vanilla, meaning your whipped cream will not taste like beans in the end.

Can I use aquafaba from cooked chickpeas instead?

If you prefer to cook dried chickpeas instead, save the cooking water from the batch and use it in this recipe instead.

Why isn’t my aquafaba whipping into stiff peaks?

Just keep whipping! Aquafaba can take up to 10 minutes to form stiff peaks with an electric mixer. Cream of tartar will speed up the process.

To store the vegan whipped cream

I recommend using the aquafaba whip as soon as it’s ready. You can pop it in the fridge for a few hours if you don’t need it right away, but any longer and it will start to deflate.

If you really need to save time, try freezing the whipped cream. The texture will be thicker and creamier when it comes out of the freezer similar to frozen Cool Whip topping. Perfect for dipping strawberries or serving on top of a warm slice of pie! So delicious!

Enjoy everyone! Happy Day! Please feel free to comment below and give this recipe a rating. Your feedback is greatly appreciated!

Subscribe here for free weekly recipes delivered right to your inbox! No need to scour the internet. Your one stop shop for recipes is here😊 No spam I promise!

This Vegan Whipped Cream recipe is ultra-fluffy, light, and coconut free! It’s easy to make using aquafaba and whips up in about 10 minutes. Perfect for holidays, special events, or whenever you want to turn vegan desserts into irresistible treats!

FOR YOUR WEEKLY RECIPE FIX. IT'S FREE

Hi I’m Verna creator of The Cheeky Chickpea. A Restaurant Chef turned professional Vegan food blogger! Sharing my best recipes. So if you're a lover of exceptional vegan food, grab your apron let's get cooking.